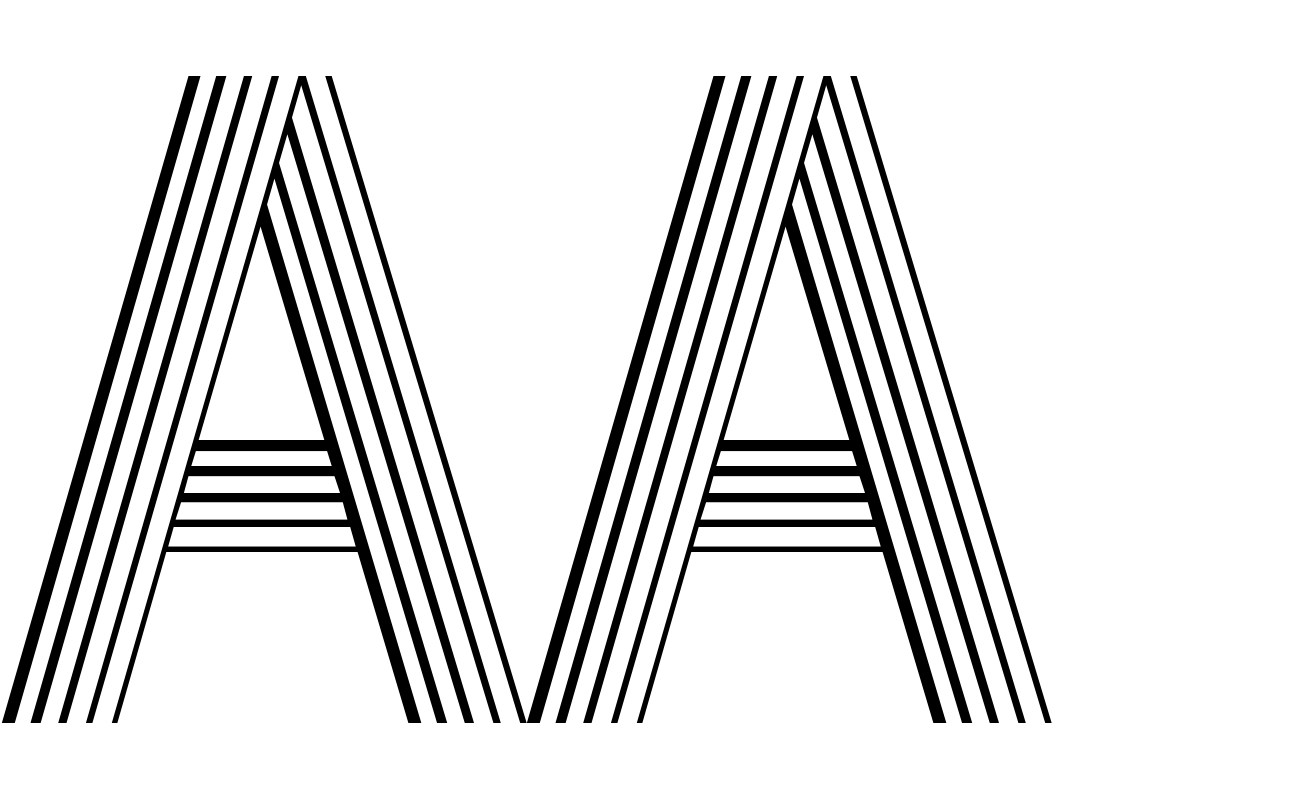 PRISMAX is a contemporary 5-line humanist font for headlines and large point size use. Our design was inspired by the infamous PRISMA alphabet by Rudolf Koch (1931) and also by Akihiko Seki's AKI LINES font (1970/72) – Famously used for Microsoft's logotype in 1975. The grading of lines gives words an extra dimension and create a sophisticated look when used well. Multiple inter-locking ligatures adds typographic flavour – Check out these combinations: OC OG DO OO HD HE HH HK HM HN HP ME NE NH NN NNE & NP. PRISMAX follows a long tradition of 'optical' and 'multi-line' alphabets, many of these designs found fame in the 70's and all of them can be traced back to RK's PRISMA font created almost a century ago! You may also want to check out our 'optical' experimental headline font Eyes Lies created in 2004.

The Path towards PRISMAX
By Yves Peters

People tend to associate multiline alphabets—typefaces whose strokes are composed of more than two parallel, unconnected lines—with neon signs and even with disco. But the origins of this particular typographic style can be found at the birth of the geometric sans serif, four decades before the popular dance genre emerged. In fact, strictly speaking, the first experiments with multiline designs can be traced all the way back to the beginning of the Industrial Revolution, more than a century earlier.

A Specimen of Modern Cut Printing Types, published in 1808 by the British foundry Fry & Steele, featured an alphabet composed of serif capitals whose thick strokes were not solid but consisted of thin parallel lines. The difference with what we now call multiline typefaces is that those lines were not open-ended. They resolved into serifs at the end of straight strokes or converged as they transitioned into the thin parts of curved strokes.

Multiline typefaces followed remarkably quickly after the emergence of the geometric sans serif. Erbar Grotesk, probably the first example of this strikingly innovative genre, was originally cast by the Ludwig & Mayer foundry of Frankfurt, Germany, in 1926. Its designer, Jakob Erbar, started from the circle as a fundamental element to arrive at a purely typographic creation, devoid of any individualistic traits and possessing supremely legible letterforms. It was the most radical step away from the gestural, handwritten origin of type since the Romain du Roi, commissioned by Louis XIV in 1692. Futura, arguably the most well-known geometric sans, was issued the following year by the Bauer Type Foundry in response to Erbar Grotesk’s success (Paul Renner’s first sketches for the iconic typeface date from as early as 1924).

1927 was also the year that Kabel, designed by Rudolf Koch at the invitation of the Klingspor, was released. The foundry in Offenbach am Main, Germany, wanted to ride the wave of the geometric sans serif, which spawned designs like the aforementioned Erbar Grotesk and Futura, Nobel (Amsterdam Type Foundry, 1929–1932), Metro (Linotype, 1929–1930), Vogue (Intertype, 1930), Tempo (Ludlow, 1930), Super Grotesk (1930–1938), and Neuzeit-Grotesk (Stempel, 1932). Even though Koch was a well-known calligrapher who favored organic, hand-drawn letterforms for his early type designs, he is reported to have said, “The task of creating a type with a pair of compasses and a straight-edge has always attracted me.”

Over the next two years, Koch drew additional weights, and in 1929, he conceived a decorative variant for headline and display purposes. Zeppelin reprised Kabel’s skeleton, describing its shapes with two parallel and concentric strokes, a thick and a thin one. The design could be considered a continuation of the inline model—typefaces whose strokes are split in two lengthwise by a negative line, like Colonna (a.k.a. Series 225, Monotype, 1926), Koralle lichtfett (Schelter & Giesecke, 1926), and Delphian (Ludlow/Monotype, 1928)—but it took the concept further by using two lines of different thicknesses. In 1930, Koch dreamed up another display extension to Kabel. Prisma, released by Klingspor in 1931, was an alphabet consisting of capitals drawn solely with thin parallel and concentric lines.

Prisma distinguished itself from previous decorative expressions in that it was uniquely connected to the concept of the geometric sans serif. One could even argue that it is the purest form of an alphabet drawn with a ruler and compass. Instead of creating volume by thickening the skeleton of the typeface, the characters’ mass is suggested by repeating the thin lines that make up their essence. It existed in two different optical scales: the characters in the four smallest point sizes were composed of four thin lines, while the larger cuts starting from 48 points used five lines.

Prisma became an overnight commercial success, spawning numerous adaptations and extensions that hoped to profit from its popularity. Schelter & Giesecke’s Onyx (1936), for example, had five lines for verticals and four for horizontals, and came with a heavy shadow. The real surge of lookalikes came after the introduction of photocomposition in the early fifties, since the new typesetting technology dramatically reduced the cost of typeface development and production. These included Optik (Klingspor, 1954), which applied a thin-thick-thick pattern of lines to Prisma’s letterforms. Prismania (Headliners, ca. 1969), designed by Richard Isbell, was a series of fifteen variations on Prisma with many alternative glyphs. Ed Benguiat adapted Prisma to ITC Bauhaus’s and Futura’s letterforms in Bauhaus Prisma and Futura Prisma & Prisma Graphic (Photo-Lettering, 1970), respectively. Three variations from the Churchward Design suite of typefaces (Berthold, 1970) by New Zealand type designer Joseph Churchward—Lines, Sparkly, and Modern—also adopted Prisma-like textures.

While neon lighting had been in use since the early twentieth century—well before Rudolf Koch designed Prisma—it seems doubtful that Koch was inspired by it. Letterforms created by bending neon tubes followed more traditional models in those early days. Inversely, ITC Neon (ITC, 1970) had Ronné Bonder and Tom Carnase inject the typical bent-tube aesthetic into Prisma’s design at the onset of the disco craze. One of the more interesting multiline typeface designs from that period was Aki Lines (ITC, ca. 1973). Designed by Akihiko Seki in 1970, its letterforms were constructed with seven parallel lines of increasing thickness. Even though the lines were not connected as in ITC Neon, their varying widths beautifully capture the kinetic energy of neon tubes illuminating in rapid succession. The letters practically seem to throb to the four-to-the-floor beat on a sweaty, sultry Saturday night.

PRISMAX is not a revival but a personal interpretation mining the rich and storied legacy of multiline typefaces. The design occupies a zone somewhere between Koch’s Prisma and Seki’s Aki Lines. More humanist than geometric, it is markedly different from other multiline fonts that obey strict geometry. The seeds for the typeface germinated on a book cover designed for a client project; the existing letters were then fleshed out into a full alphabet and augmented with numerals, punctuation, and all of the other glyphs required for a viable font. Obviously, though, PRISMAX has no lowercase: these characters are not fit for small sizes because, set small, the lines would start to get muddled and bleed into one another. PRISMAX insists on being used big to allow the lines of increasing thickness to pulse and scintillate, creating a hypnotic rhythm that will surprise and delight.